This article was written exclusively for Investing.com

After taking the spotlight in 2017 on the back of a meteoric rise, the digital currency asset class lost a bit of its luster until late 2020. , the cryptocurrency pack leader, reflects approximately 63.6% of the asset class’s market cap. , another leading digital token, represents about 15.2%.

In late 2017, one of the factors that pushed Bitcoin’s price to over the $20,000 level for the first time was the introduction of on the Chicago Exchanges. On Feb. 8, the Chicago Mercantile Exchange plans to roll out dollar-based Ether futures, which could turbocharge the price action in one of the leading digital currencies.

The market cap of over 8,300 cryptocurrencies recently rose above the late 2017 high and was sitting at over $930 billion as of the end of last week. Meanwhile, a trillion dollars is not what it once was, as a handful of technology companies have market caps above that level. As of Jan. 22, Apple’s (NASDAQ:) market cap stood at $2.34 trillion, more than double the level of the entire digital currency asset class.

Meanwhile, Ethereum is one of the top cryptos and has held that position over the past years.

As the chart shows, Ethereum was the second-leading digital token with a current market cap of around $147.33 billion. Ethereum’s market cap is over $50 billion above the next eight tokens in the top ten.

Explosive move in Ether since December

In March 2020, when Bitcoin, other tokens, and markets across all asset classes reached lows under the weight of risk-off selling because of the global pandemic, Ethereum fell to a low of $113.58 per token. At the end of November, the price recovered to $602.39. In December and January, the price exploded higher. 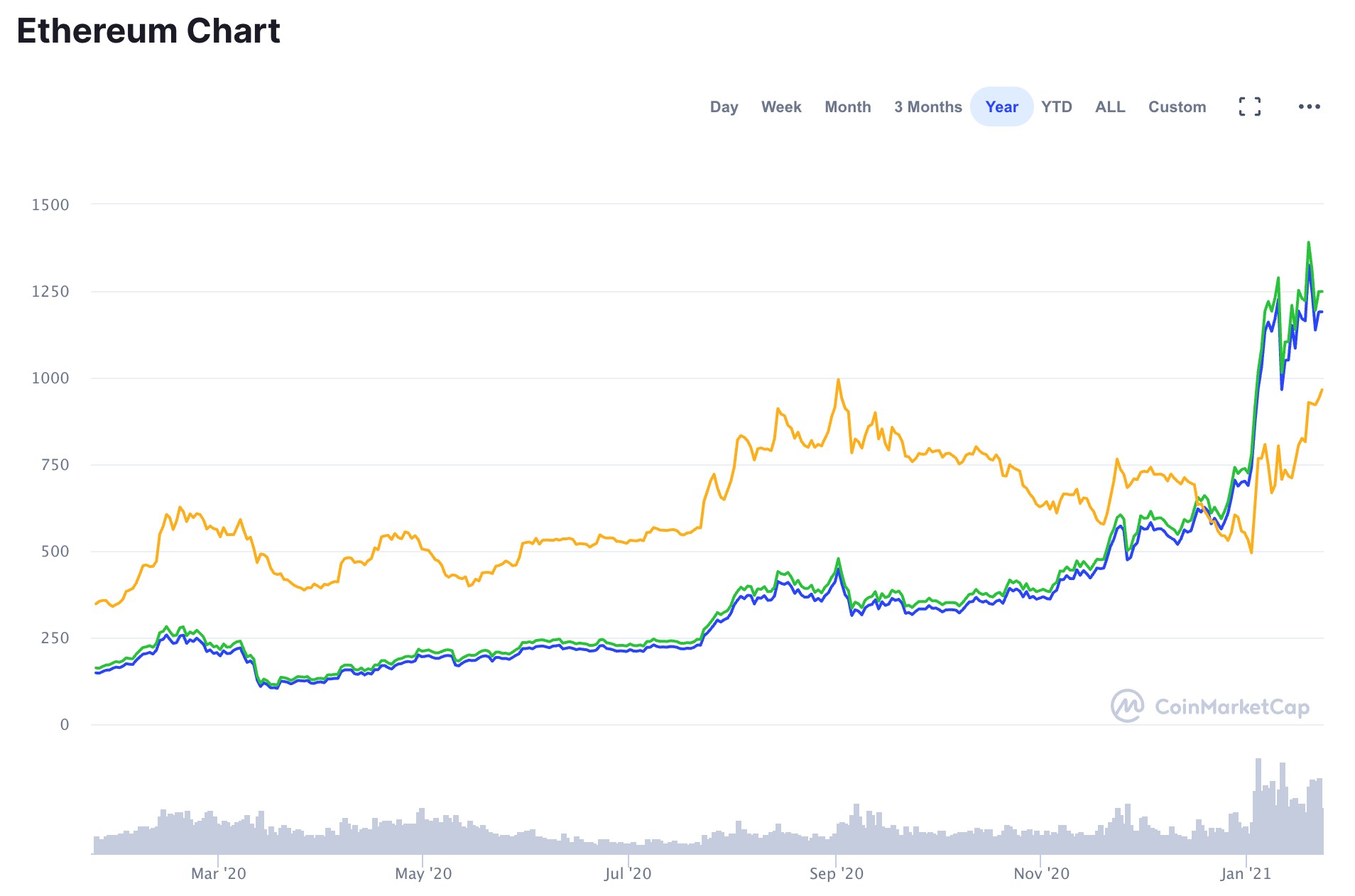 The chart illustrates the rise in Ethereum’s price to a high of $1,391.01 on Jan. 19. It’s currently trading at $1,290 level at time of writing, not far below the high. Meanwhile, the most significant move for this digital currency could be on the horizon.

CME futures on Feb. 8 could push prices to even higher levels

In late 2017, Bitcoin futures began trading. The introduction pushed the price of the leading token into the stratosphere and to over $20,000 per token for the first time. The potential for an explosive move in Ethereum could be only days away.

The Chicago Mercantile Exchange is the world’s leading derivatives marketplace. The CME is awaiting regulatory approval for listing Ethereum futures on Feb. 8, 2021. The regulatory issue is likely moot as the exchange currently lists a regulated Bitcoin contract. 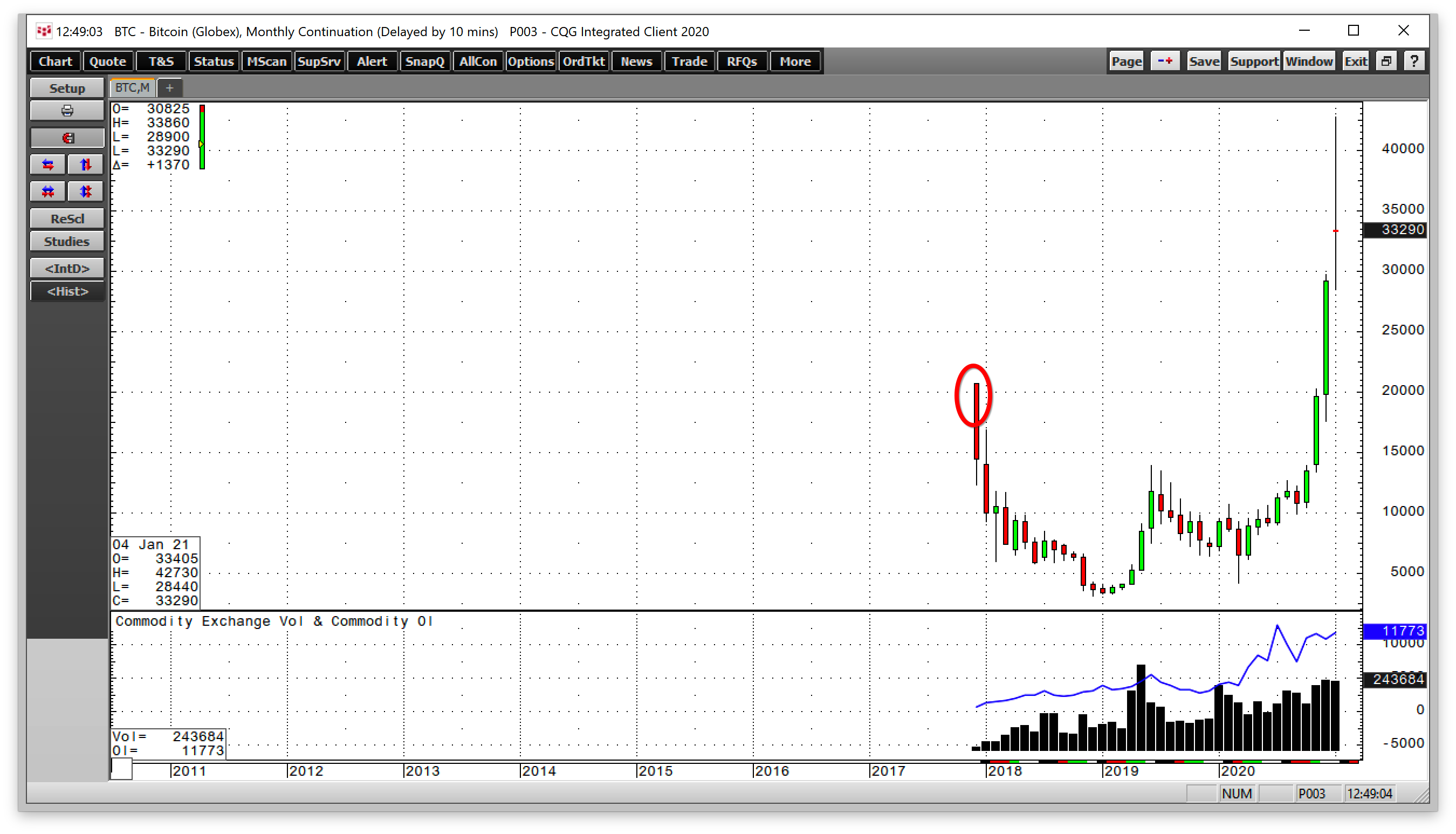 The above chart shows the initial peak of Bitcoin’s price in late 2017 just as the CME listed its futures contract. Moreover, the volume and open interest in the Bitcoin futures contract has been rising, building liquidity for derivatives based on the leading digital currency. Each CME Bitcoin futures contract contains five Bitcoins. As of late 2020, an average of 42,800 Bitcoins changed hands on the exchange each day. In early 2021, the explosive price action that lifted Bitcoin to a high of $42,730 increased its volume.

A CME Ethereum contract on Feb. 8 will increase liquidity and offer market participants another way to participate in the asset’s second-leading instrument.
We could see Ethereum’s price experience a similar move to Bitcoin’s in late 2017 as the CME futures provide another option for those looking to participate in the market without holding the currency in wallets or unregulated exchange platforms.

Ethereum is the most actively used blockchain

While ether is the second-largest cryptocurrency by market capitalization to Bitcoin, Ethereum is the most actively used blockchain. There are 18.8 million Bitcoins in circulation compared to 114.373 million for ether. Bitcoin is just a currency; Ethereum is a ledger technology companies use to build new programs.

Bitcoin and Ethereum operate on blockchain technology, but Ethereum’s is more robust. Ether is the currency used by Ethereum. Bitcoin is currently viewed as the cryptocurrency with the widest acceptance, but Ethereum futures are likely to increase ether’s profile.

Many choices in the digital arena; Swapping between tokens could be the optimal approach

Bitcoin futures were the first step. Ethereum’s are the second as the market matures and develops. We are likely to see more digital currencies in the futures arena after the market digests the new contract early next month.

Meanwhile, the next evolution will be ETF and ETN products that will increase the asset class’s addressable market. With over 8,300 tokens and more coming to market each day, the potential opportunities for traders and investors will expand with the market.

Swapping tokens between the cryptos will become an active business for professionals and novice market participants. Each token has a story and a purpose, which will lead to the arbitrage, speculation, and hedging activities that currently occur in the massive fiat foreign exchange market.

One significant stumbling block could be increased oversight and regulation from governments that view the asset class as a challenge to their control of the global money supply. The risk of government interference in the digital currency asset class that essentially rejects government control will likely rise with the asset class’s market cap.

The next significant event for digital currencies is on Feb. 8, when the CME rolls out its Ethereum contract. If history repeats, expect the ether token price to continue to spike higher. The futures are a new arena that expands its addressable market.