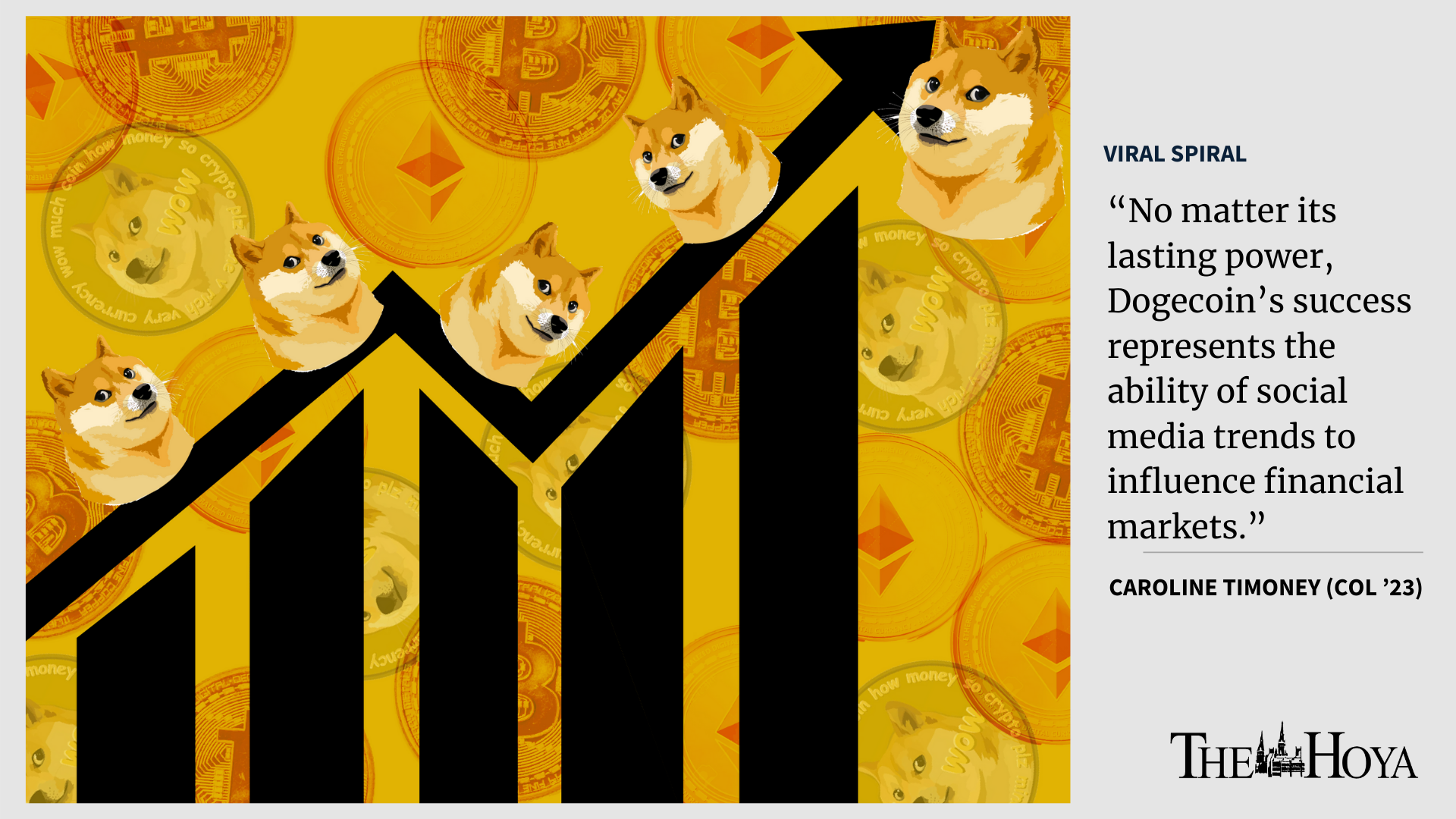 Cryptocurrency, currently dominated by the popular Bitcoin, has recently had a new name come to the forefront: Dogecoin. Inspired by a 2010 meme and considered a “joke cryptocurrency,” Dogecoin has recently soared in popularity. On Jan. 28, 2021, Dogecoin surpassed the record previously held by Bitcoin for the cryptocurrency with the most mentions on Twitter.

Dogecoin has seen an increase of over 1600% in value in the past year, primarily due to spikes in popularity spurred by social media buzz. The cryptocurrency has piggybacked off the recent boom in small-time investment driven by Reddit threads that skyrocketed GameStop and AMC stocks in January, prompting widespread social media conversations.

Dogecoin was created in 2013 by software engineers Billy Markus and Jackson Palmer as a joke to satirize the recent growth of alternative currency. They named their cryptocurrency after a popular internet meme of a Shiba-Inu, referred to in internet lingo not as a dog but a “doge.” With a current market cap of around $7 billion and status as the 14th largest cryptocurrency, Dogecoin has proved itself to be far more than a meme.

Whereas a singular bitcoin is currently worth around $50,000, one Dogecoin is about 8 cents. This means Dogecoin is far more accessible to the general public, as it can be used for micro-tipping — paying small amounts of money in cryptocurrency — and trading small payments.

Dogecoin has also differentiated itself as a cryptocurrency focused on doing good. Cryptocurrency has a reputation for being used for the black market and shady business deals because of the anonymous nature of blockchain-based online currency. The official Dogecoin Twitter account @dogecoin encapsulates the spirit of the cryptocurrency in a recent tweet: “Do Only Good Everyday. Charity, fundraising, supporting each other, teaching people about cryptocurrency, having fun, making memes, being absurd. This is what #dogecoin is.”

Dogecoin’s recent boom was caused by a series of tweets from Tesla CEO Elon Musk, who revelled in the memey-ness of Dogecoin. Throughout February, Musk tweeted “Dogecoin is the people’s crypto,” and also posted “who let the Doge out.” He also posted a meme of himself as “The Lion King’s” Rafiki lifting Simba with the face of a Shiba Inu, representing Dogecoin. Even rapper Snoop Dogg has gotten in on the fun, tweeting “Snoop Doge” on Feb. 6.

It is important to note that while Elon Musk certainly jokes about being the father of the recent Dogecoin movement, he has not invested serious money into it and has expressed his concern with the cryptocurrency. Musk noted in a tweet that much of Dogecoin seems to be owned by a few individuals, and he believes in the merits of cryptocurrency only if it can be held by a broader public. He tweeted, “If major Dogecoin holders sell most of their coins, it will get my full support. Too much concentration is the only real issue imo.”

The celebrity social media conversation about Dogecoin has led to its recent jump in value, showing the power of social media to influence real-world markets.

Dogecoin co-founders Billy Markus and Jackson Palmer found it absurd that Dogecoin’s investors are motivated by a social media trend, rather than the belief in cryptocurrency as a monetary trading form.

Markus and Palmer’s shock over the newfound legitimacy of their cryptocurrency brought Dogecoin into the larger conversation on social media-inspired investment trends and whether these trends democratize the financial market or simply create dangerous bubbles.

Even the Dogecoin Twitter account cautioned its followers, posting, “[Dogecoin] is not harassment, threats, FOMO, baseless hype, abusive. Be safe. Be smart. Be kindly”.

Dogecoin toes the line between being a currency essentially based on social media hype while simultaneously dissuading its investors from making risky investments solely because of internet trends. No matter its lasting power, Dogecoin’s success represents the ability of social media trends to influence financial markets. The chances remain remote that this meme-turned-cryptocurrency will become the top cryptocurrency, but maybe Elon Musk is right to tweet “The most entertaining outcome is the most likely.”