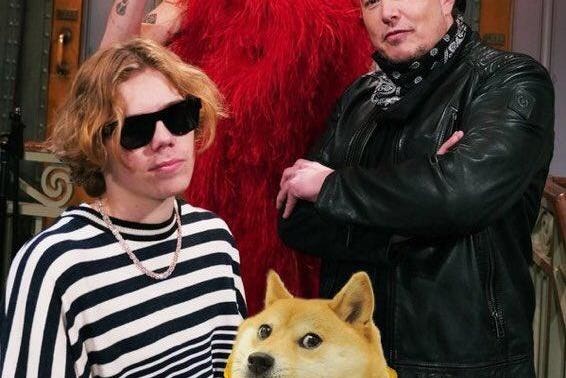 Dogecoin, the “joke” cryptocurrency that’s a favorite of Tesla billionaire and self-proclaimed “Dogefather” Elon Musk, has doubled in value this week, adding to its already mind-numbing gains this year.

The dogecoin price has soared as hype builds ahead of Musk’s hotly-anticipated appearance on comedy show Saturday Night Live (SNL), while analysis revealed exactly how much three stimulus checks would now be worth if they’d been used to buy dogecoin.

As dogecoin traders and investors pile into the meme-based token ahead of SNL, betting odds have revealed there’s a 40% chance the dogecoin price will soar to $1—even after Musk warned people to “invest with caution.”

With Musk repeatedly cueing up his SNL debut over the last week, there’s now a 98% chance the Tesla billionaire will mention dogecoin on the show, according to odds issued by online sportsbook MyBookie. On Friday night, Musk shared an image of himself, singer Miley Cyrus and Australian rapper The Kid Laroi with dogecoin’s Shiba Inu dog photoshopped alongside them on Twitter with the caption: “Guest starring…”

The dogecoin price, already up by 17,000% so far this year, was found to have a 40% chance of rallying to the closely-watched $1 per dogecoin token mark by Monday morning—an increase of 42% from its current price of around 70 cents.

The dogecoin frenzy, spurred on by Musk and fellow billionaire Mark Cuban in recent weeks, has been driven largely by retail traders hoping to get-rich-quick. Traders and investors began pouring cash into dogecoin in January this year amid a meme-led stock market rally that saw the price of GameStop stock explode.

However, Musk has warned this week that while he thinks “cryptocurrency is promising,” people should “invest with caution”—commenting via Twitter on a TMZ YouTube video titled: Elon Musk Says Dogecoin Could Be the Future of Cryptocurrency.

With this week’s dogecoin price rally briefly pushing the memecoin into the crypto top three, behind only bitcoin and ethereum, many in the crypto community have warned people not to get carried away.

“The reason people like investing in cryptocurrencies like dogecoin is because they feel they can turn their investment into a much larger amount in a short period of time,” Adam Morris, cofounder of cryptocurrency education website Crypto Head, said in emailed comments.

“While it’s one of those investments that could go well short-term, this gambling mentality makes for poor long-term investment decisions. But, when it’s risen by 1260% in the last month you can see why retail investors would be attracted to invest.”

“Dogecoin investors are basically betting they’ll be able to cash out by selling to the next person wanting to invest,” David Kimberley, analyst at trading and investment app Freetrade, said via email.

“The latest uptick in dogecoin’s price isn’t indicative of any meaningful value the cryptocurrency offers, it’s just a surge in interest from people looking to get-rich-quick. That can make for a fun bet, but it’s not good investing. And if you’re the one left holding on to the coins when the market tanks, you may regret taking a punt in the first place.”