The popular meme-coin of Dogecoin (DOGE) has been consolidating for the second half of February between the values of $0.041 and $0.064. This is after DOGE set a new all-time high of $0.088 on the 29th of January and would once again retest this price area on the 8th of February.

Dogecoin’s consolidation between the aforementioned price areas can be seen in the following DOGE/USDT daily chart. At the time of writing, Dogecoin is trading at $0.051 with the 50-day moving average providing adequate short-term support for DOGE into the new month of March.

Also from the chart, the following can be observed.

Summing up the brief technical analysis, Dogecoin might continue to consolidate in the earlier identified zone of between $0.041 and $0.064 for a few more days before a concrete direction is seen. One scenario is a drop to the 50-day moving average based on the decreasing daily trade volume identified above.

To note is that Dogecoin has more or less broken loose from the effects of Bitcoin since late last year. This fact is best exemplified by the following Dogecoin/Bitcoin correlation chart provided by Coinmetrics. From the chart, it can be observed that Dogecoin’s correlation has been dropping since October 2020 levels of 0.86, to the current low levels of 0.285. 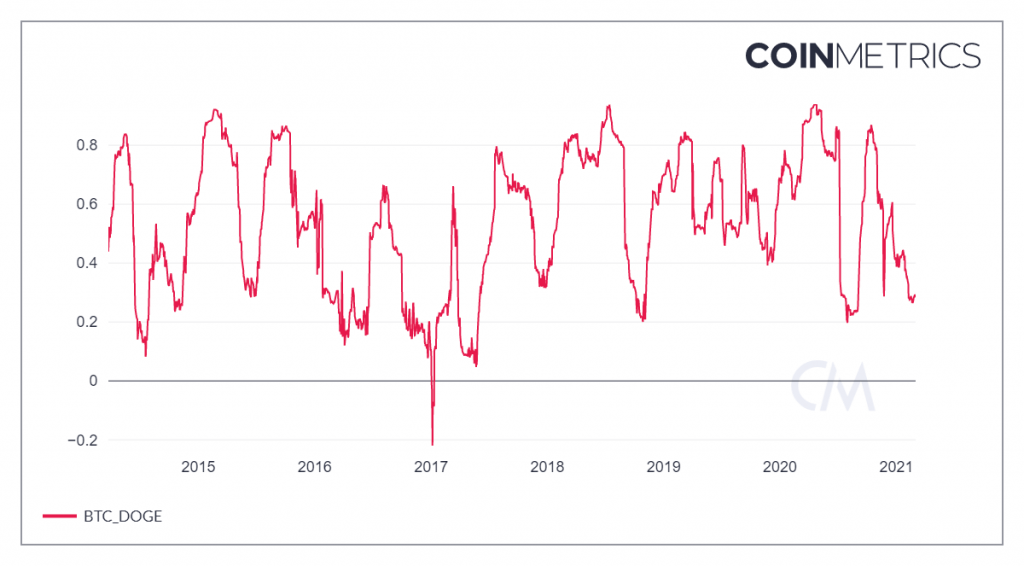 The drop in correlation between Dogecoin and Bitcoin could be due to the unofficial CEO of DOGE, Elon Musk, constantly tweeting about the meme-coin. This fact, coupled with the popularity of Dogecoin through the WallStreetBets community, has allowed DOGE to break free from the direct effects of BTC’s price action. This also explains Dogecoin’s minimal response to Bitcoin reclaiming $50k earlier today.