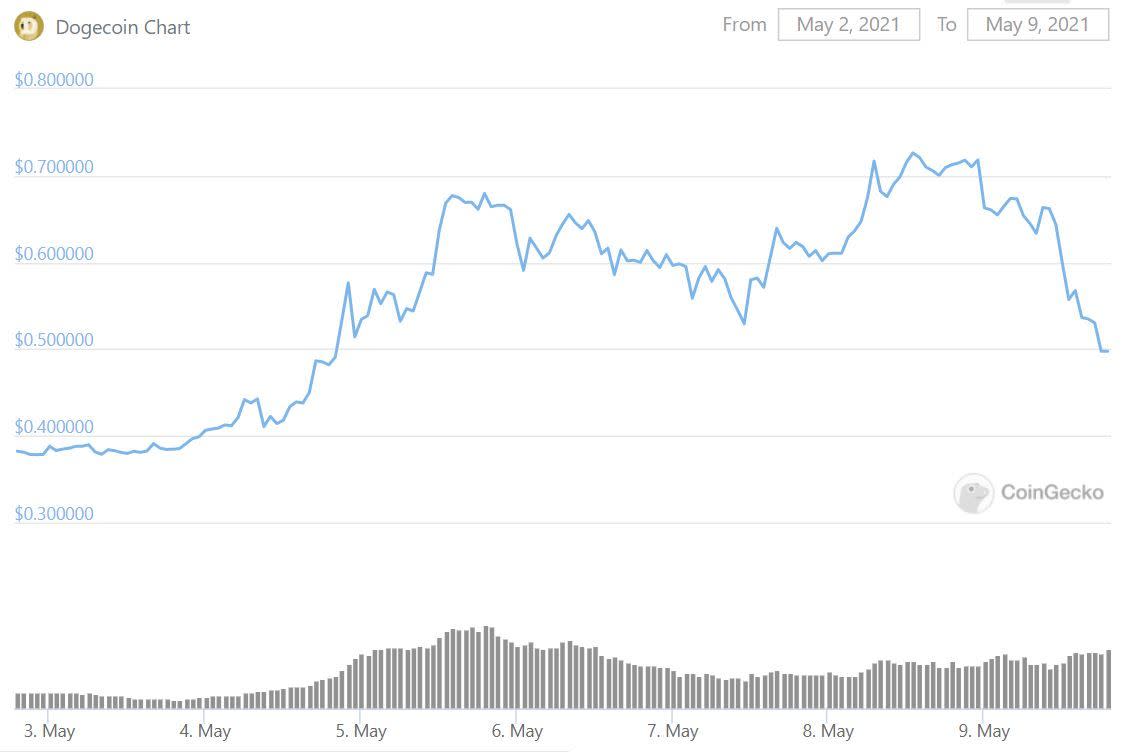 (Bloomberg) — Dogecoin, the fifth most valuable cryptocurrency, retreated from an all-time high after billionaire Elon Musk, appearing on “Saturday Night Live,” jokingly called it “a hustle.”

The altcoin had surpassed 73 cents on Saturday before dropping to 46.01 cents as of 8:08 a.m. in New York Sunday, a 35% decline in 24 hours, according to pricing from CoinGecko.

Dogecoin hadn’t been below 50 cents since May 4, amid a rally in anticipation of the “SNL” episode. The activity may also have affected Robinhood, which said earlier that it was having some issues with crypto trading, citing high volume and volatility.

Musk was asked repeatedly during the “Weekend Update” segment to explain what Dogecoin is. After reciting multiple facts about the cryptocurrency in the character of a financial expert, he was asked if Dogecoin was a “hustle.” He responded, “yeah, it’s a hustle.”

Musk, 49, is the world’s second-richest person with a net worth of $183.9 billion, according to the Bloomberg Billionaires Index. In his monologue, he said he’s the first person with Asperger’s to host the show; Dan Aykroyd actually was. Musk helped drive Dogecoin to new heights on Friday and Saturday after tweeting a picture of himself and a Shiba Inu, the dog breed that lends its image to the altcoin, on the set of the NBC show.

Dogecoin, a cryptocurrency that started as a joke in 2013, has surged more than 16,000% in the past year, according to CoinGecko. Musk has been among its biggest boosters, along with Mark Cuban, Snoop Dogg and Gene Simmons. Dogecoin traders around the world organized watch parties for the “SNL” episode.

An earlier Dogecoin reference came during the opening monologue where his mother, Maye Musk, joined him on stage. The author and model said she was excited about her Mother’s Day gift, and she hoped it’s not Dogecoin — to which he said, “it is.”

In the character of the financial expert, Musk also called Dogecoin “the future of currency, it’s an unstoppable financial vehicle that’s going to take over the world.”

Meanwhile, DCG Holdco Inc. CEO Barry Silbert posted on Twitter hours before the “SNL” episode that he’d gone short Dogecoin via a leveraged token, and that it was time for people to convert Dogecoin into Bitcoin. He later added that if Dogecoin hits $1 by May 31, $1 million would be donated “to a charitable cause selected by the Dogecoin community.”

Bitcoin, the largest cryptocurrency, retreated more than 1% to about $58,000. Musk’s Tesla Inc. announced in February that it had bought $1.5 billion of Bitcoin, and the head of the electric-car giant himself has spoken of the digital asset in favorable terms.

Cryptocurrencies are “promising, but please invest with caution,” Musk tweeted on Friday, linking to a video that showed him talking about the merits of crypto, particularly Dogecoin. That followed months of Twitter posts from Musk about the likes of Bitcoin and Dogecoin, almost all favorable.

For more articles like this, please visit us at bloomberg.com

Subscribe now to stay ahead with the most trusted business news source.