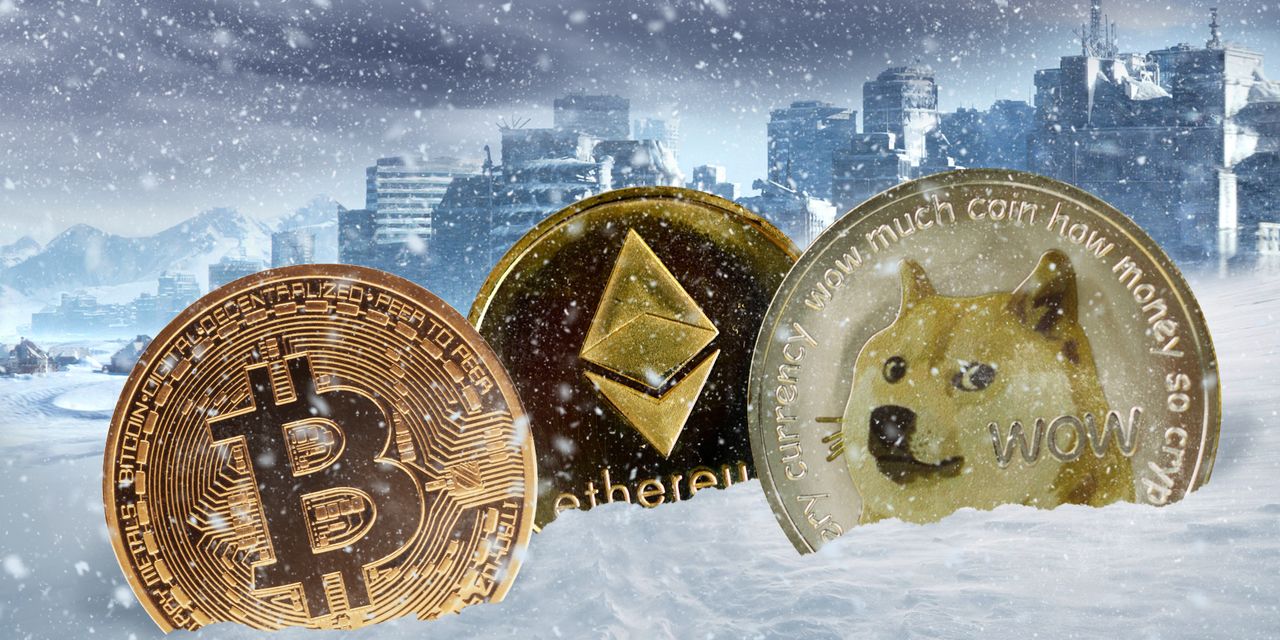 Crypto winter? Bitcoin lurches to lowest level in months and alts like dogecoin sink 48% from peak

Is an new crypto winter upon us? It’s impossible to know for sure but digital assets were in the midst of a significant decline on Thursday that was taking most prices back down to their lowest levels in months, and it wasn’t just comments from crypto bull Elon Musk sparking a bearish tone in the sector.

are down more than 20% over the past two days, which would mark its steepest two-day slide since March 13, 2020, according to Dow Jones Market Data.

From its peak around $64,829, bitcoin prices are down 25%, easily meeting the commonly used criteria for a bear market in an asset.

The carnage wasn’t isolated to the world’s No. 1 and 2 digital assets, with the broad decline shaving approximately $400 billion off market cap from the crypto complex, which had hit a recent peak in May above $2.5 trillion, according to data from crypto research company CoinMarketCap.com.

were down 48% from a peak reached this past Saturday. The meme currency, which was created back in 2013, was changing hands at around 39 cents, at last check, down 14% on CoinDesk. Its market value was at $51 billion after topping at $90 billion.

Few of the thousands of crypto trading on Thursday were in positive territory, with the exception of cardano
ADAUSD,
,
up 1.8% Thursday.

So what sparked the downturn?

There is no one thing and often it doesn’t take much for crypto to reach a point where a sustained pullback ensues. That was the case around November and December of 2017 as the digital assets, which had enjoyed a strong run-up, began a prolonged slump that didn’t end until around 2019-20.

However, many investors will point to two factors in recent trade that may be contributing to the bearish tone in crypto.

Tesla Inc
TSLA,
.
Chief Executive Elon Musk said Wednesday via Twitter that his electric-vehicle company would halt sales using bitcoin due to the effects on the environment that cryptocurrency mining can have. Musk had been seen as a major crypto benefactor and his change in tone was blamed for rattling bitcoin.

“Bitcoin has had mainstream acceptance and adoption. Tesla and Musk are still heavily invested in Bitcoin, but this pivot is detrimental for the short-term outlook,” wrote Edward Moya, senior analyst at Oanda, in a daily note.

On top of that, Bloomberg News reported on Thursday that the largest crypto trading platform in the world by volume was being investigated by the U.S. Justice Department and Internal Revenue Service.

Binance, which was founded in 2017 and is run by Changpeng Zhao, told Bloomberg that it doesn’t comment on specific regulatory inquiries.

A spokeswoman was quoted as saying, however, that the company takes “legal obligations very seriously” and engages with “regulators and law enforcement in a collaborative fashion.”

The slide in crypto prices came as traditional assets were also facing headwinds as economies hobbled by the COVID pandemic attempt a rebound. Benchmark U.S. stock indexes were attempting to rebound from a withering day on Wednesday that saw the Dow Jones Industrial Average
DJIA,
,
the S&P 500 index
SPX,

and the Nasdaq Composite Index
COMP,

sustain sharp losses blamed on inflation fears. Risky assets were being dumped at a rapid clip in favor of assets that held the promise of better performance in healthier economic times.

Katie Stockton, analyst at Fairlead Strategies told MarketWatch that bitcoin had been in a downtrend even before recent events and she sees a test of $42,000 a possibility.

“Bitcoin has lost short-term momentum after having been tethered to its 50-day [moving average] and cloud-based resistance for a couple of weeks,” she wrote in an emailed note.

Anthony Denier, CEO of trading platform Webull, said that bitcoin, at least, was vulnerable to a pullback and that its current powerful slide, prompted partly by Musk’s comments suggest that it was in a bubble.

“Yes, Bitcoin is in a bubble. I think the proof here is that one person’s comments were able to make the price of Bitcoin drop by 17% in just one day,” he said.