To many people, Bitcoin (CCC:BTC-USD) is synonymous with cryptocurrency. Bitcoin was the first crypto, and as of right now it’s the biggest by market capitalization. All other cryptocurrencies are based on it.

But there are significant flaws with Bitcoin and its blockchain. One is the transaction time. Many people are surprised to find out that a single transaction on blockchain could take as long as 24 hours to complete. A second problem is the incredible amounts of power that are used by the Bitcoin network.

This is a result of the mining process. Bitcoin miners create new Bitcoins. For doing so, they receive some Bitcoin as a reward.

In order to mine, the miners need to solve incredibly complex cryptologic puzzles. To do so, they need tremendous amounts of computing power. Some estimate that the Bitcoin network uses more power than the entire country of Chile.

Robinhood users should be aware that the company’s crypto platform is limited. Users can only trade Bitcoin and Bitcoin Cash (CCC:BCH-USD), Ethereum (CCC:ETH-USD), Litecoin (CCC:LTC-USD) and Dogecoin (CCC:DOGE-USD).

Here are seven other cryptocurrencies that Robinhood should add to its platform:

The creators of Cardano want it to be the financial operating system of the world. It can also be used for other applications, like securing elections and legal contract tracing. The stated goal is to “redistribute power from unaccountable structures … to individuals.”

Cardano was co-developed by Charles Hoskinson, one of the five initial founding members of Ethereum. He wasn’t happy with the direction Ethereum was going in, so he left to start Cardano. Not surprisingly, Cardano is competition for Ethereum now. Some even call it the “Ethereum of Japan.”

As you can see on the above chart, ADA traded basically flat for the latter part of last year, just below the 20-cent level. But then, in the beginning of January, it got caught up in the recent crypto craze and soared to levels around $1.10. The current market capitalization is about $37 billion. 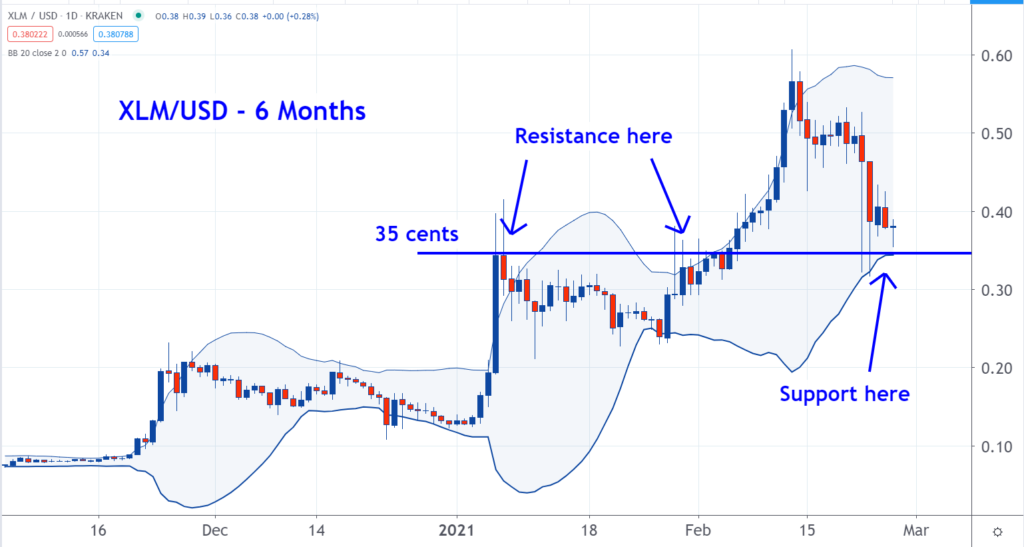 The idea behind Stellar Lumens is an open network that allows money to be moved and stored around the world. The current market capitalization is about $9.2 billion. An advantage of this crypto is the extremely low transaction cost. Every transaction, regardless of the size, costs just 0.00001 XLM.

Stellar was released in July 2014.  The goal was to bring banking services to the two billion people in the world who don’t have access to traditional banking.

It has since evolved, and the focus now is to use blockchain technology to connect financial firms.

As you can see on the chart, XLM is testing support around the 35-cent level. There is support at this level because it had previously been resistance. If this support breaks, the next level with support should be around 20 cents. This level was resistance throughout December. 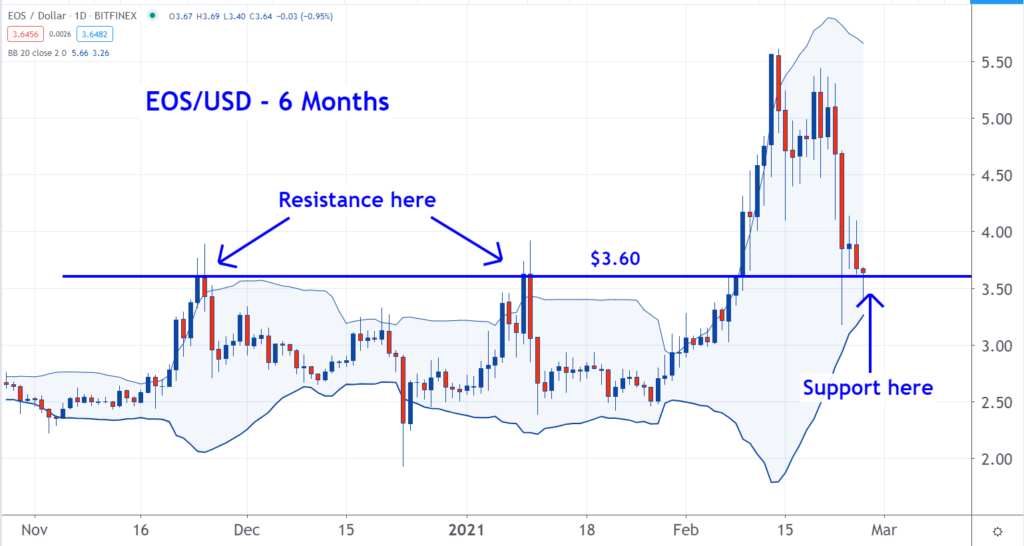 EOS is a smart-contract platform. The current market capitalization is about $3.5 billion.

As you can see on the above chart, EOS is testing support around the $3.60 level. This level was resistance in November and January.

This is an important principle of financial markets. Levels that had been resistance in the past can turn into support levels. It may seem strange, but this is a common occurrence.

It happens because of remorseful or regretful sellers. These are the investors who sold EOS at $3.60. When the crypto trended lower afterward, they believed that their decision to sell was a good one.

But now that EOS is above that level, a number of these investors have come to regret their decision. Many of them decide that they will buy it back — but only if they can get it for the same price they sold it for. This results in buy orders being placed at a level that was resistance.

If there are enough of these buy orders, support forms like we see here. 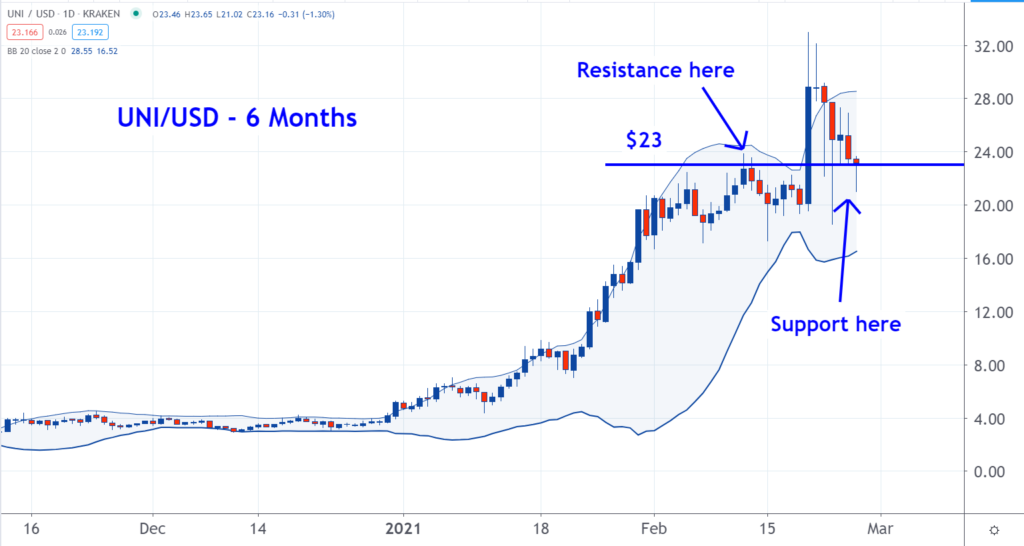 Uniswap is an Ethereum token or cryptocurrency that powers the Uniswap network. It is designed as a decentralized exchange. This means there is no middleman or central facilitator on Uniswap. Instead, the tokens are exchanged or traded through liquidity pools. These pools are created and defined by smart contracts.

Some analysts believe that in the long run, decentralized exchanges could be a better investment than payment currencies like Bitcoin. As the name implies, payment currencies are used to make payments. Other payment cryptos include Litecoin and Bitcoin Cash.

Exchanges, like the Uniswap network, are open for people to build their own applications on its blockchain. As more applications are developed, the demand for the UNI tokens will increase. This should drive the price higher.

As you can see on the above chart, the $23 level was resistance through most of February. Now it has become support. 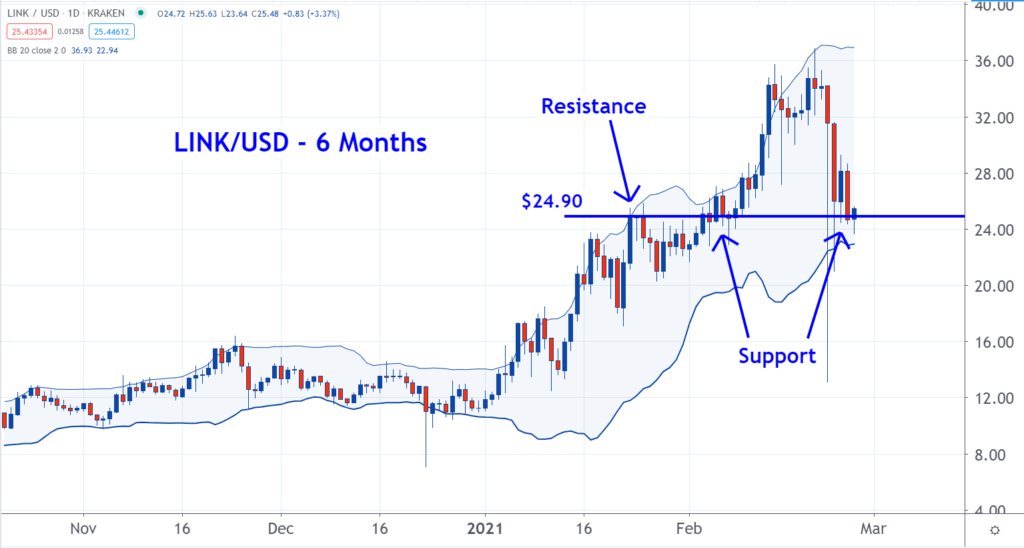 Chainlink is a decentralized exchange that operates in a similar way to Uniswap. LINK is a cryptocurrency that powers the Chainlink protocol or network. It was launched in 2017 by Sergey Nazarov.

The network provides price and events data that is collected from on-chain and real-world sources. It has the ability to get the data needed to operate many blockchain-based smart contracts.

Chainlink does not operate its own blockchain like most cryptocurrencies do. LINK is designed to be blockchain agnostic. This means that it can run on many different blockchains at the same time.

Like the others, what was resistance for LINK has now become support. As you can see on the above chart, this has happened at the $24.90 level. 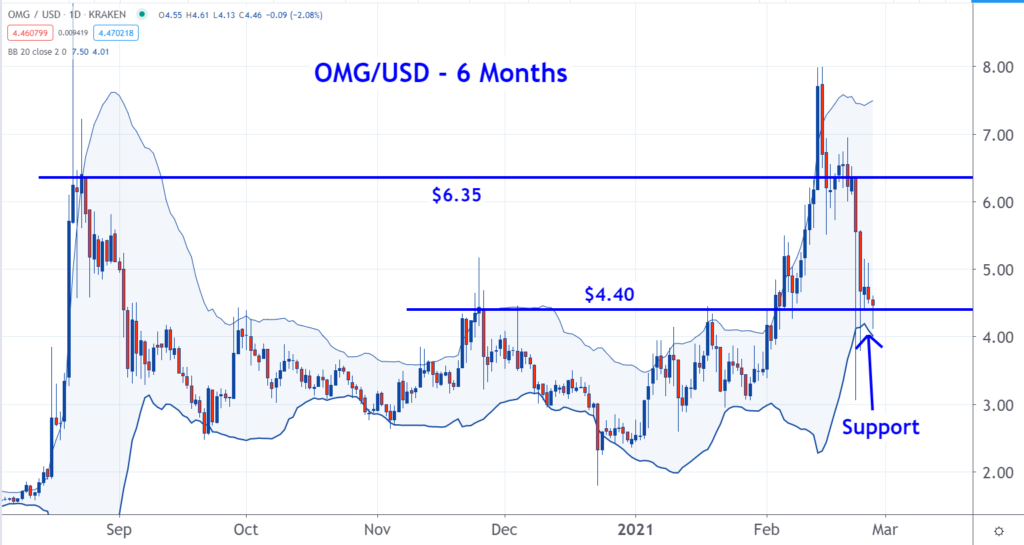 OmiseGO is a crypto that was developed for a specific reason. It was actually developed using the smart contracts on the Ethereum Network, but it is a different currency.

OMG was designed to enable financial services for people who don’t have bank accounts. This is potentially a huge market.

It is estimated that two billion people have access to cell phones and cell service, but don’t have access to traditional banking. They can’t walk to their local branch and meet with a customer service representative if they want to apply for a mortgage or a credit card.

They are locked out of the system because, without access to these services, these people can’t establish credit histories.

As you can see on the above chart, OMG has rallied recently. But the gains are less than BTC over the same time period. But in the long run, if OMG is able to accomplish its goals, the price may move significantly higher. 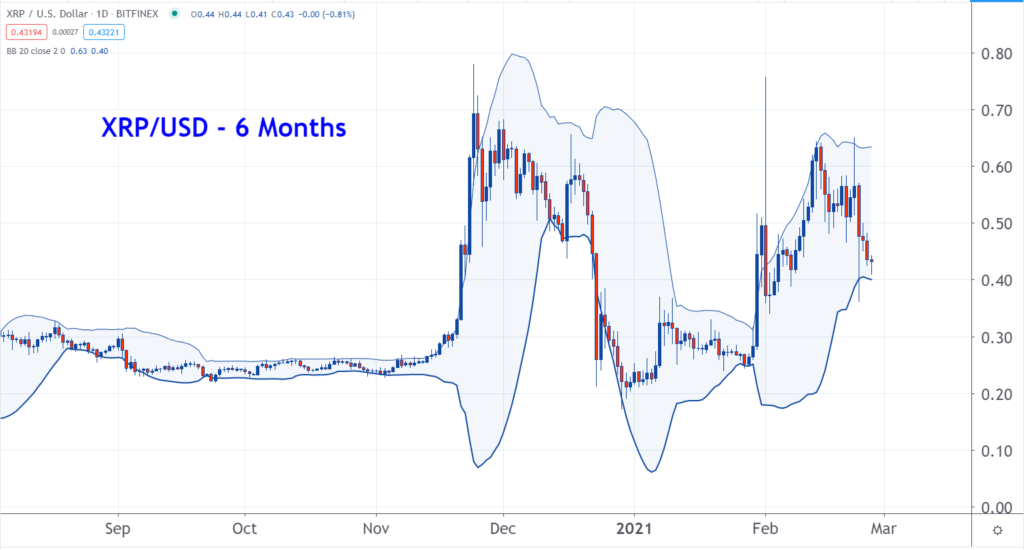 The idea for Ripple is actually older than Bitcoin. It was designed in 2004 as a peer-to-peer network that would eliminate banks. When Bitcoin came along, Ripple decided to develop its own cryptocurrency. XRP was the result.

XRP has advantages over Bitcoin. One is that it isn’t mineable. The are no miners in the network. It is limited to the 100 billion coins that are in circulation now. Because of this, it doesn’t require the enormous amounts of power that Bitcoin does.

Additionally, the Ripple network is much faster than the Bitcoin network. It can also handle more transactions.

Right now, the biggest users of Ripple are large financial institutions. The network has facilitated and increased the efficiency of transactions of their users.

At the time of this publication, Mark Putrino did not have any positions (either directly or indirectly) in any of the aforementioned securities.