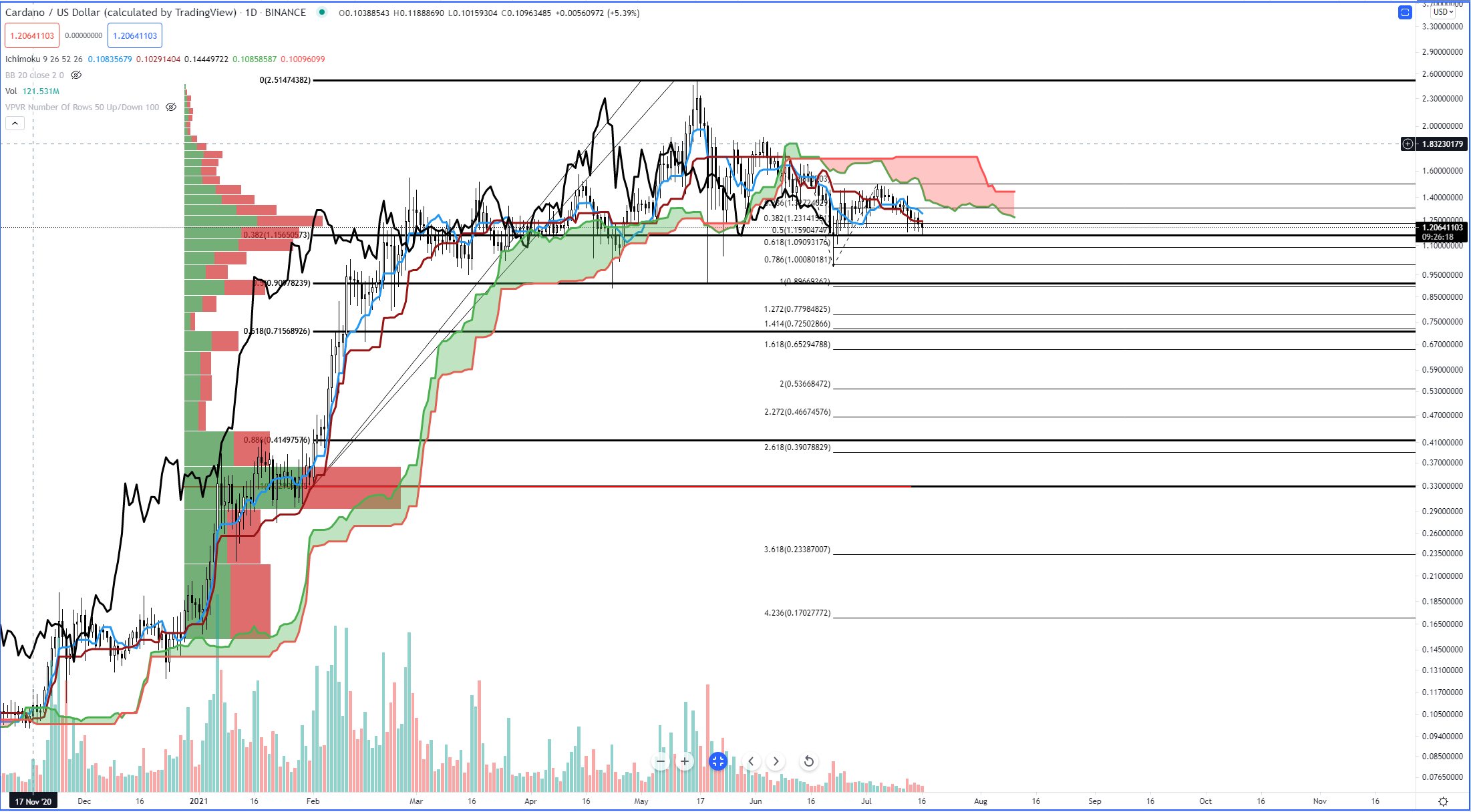 Traders have been pushing Cardano fairly hard against its near term support level at $1.20. Today is the fifth day of pressure against $1.20, but bears have not been able to close below that level yet. However, lower highs continue to print so it is very, very likely that Cardano will breach the $1.20 level to test the next support zone below. And where is that? Between $0.84 and $0.94. There is a strong confluence zone around the $0.90 level where the 50% Fibonacci Retracement ($0.9087), 100% Fibonacci Extension ($0.8966), and a high volume node exist. I would expect to $1.20 fail sometime between the end of the trade day Friday (July 16th, 2021) and the weekend. 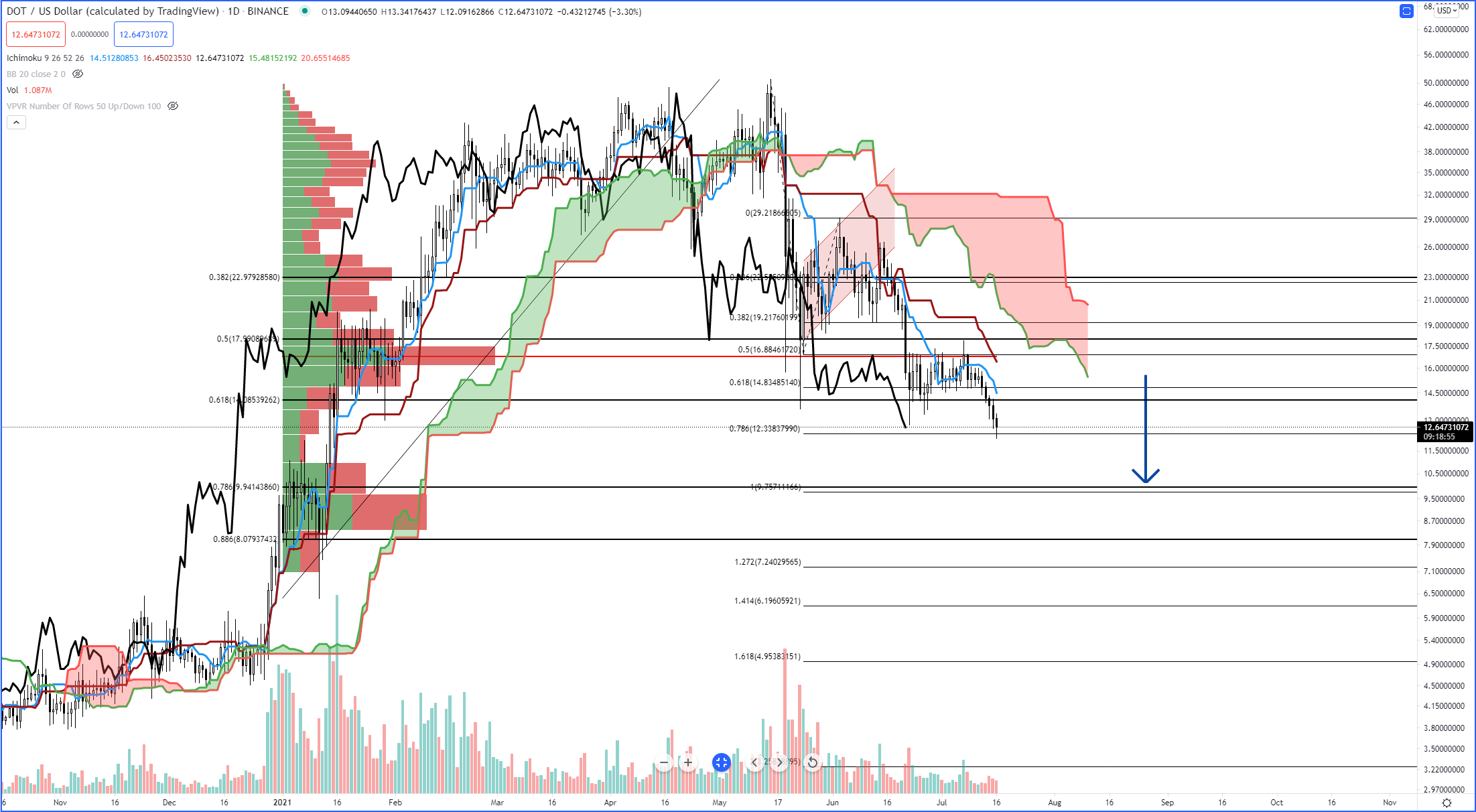 Polkadot (DOT) has come a good distance lower since its prior all-time highs in May. It’s sometimes hard to believe that it was once trading as high as $50.74. Ever since the breakdown below the bear flag almost exactly one month ago (June 14th, 2021), DOT has taken a stead drive lower. There was some congestion and churning between June 22nd and July 10th, but we’ve since seen a continuation move lower this week. The 2021 VPOC (Volume Point of Control) is at $16.81 and has acted as the major resistance level since June 22nd. DOT is also trading below its 50% Fibonacci Retracement level at $17.99. Presently, it has moved as low as $12.09 and has bounced of the 78.6% Fibonacci Extension at $12.33. Will it go lower? Probably. A look at the volume profile for 2021 shows a massive volume trough between $13.46 and $10.92. The price level I see Polkadot heading to is $10.00. The 78.6% Fibonacci Retracement is at $9.94 and the 100% Fibonacci Extension is at $9.75. The top of the next high volume node is at $9.75. The $10 is also a natural psychological level – so it seems very likely that we’ll see Polkadot (DOT) test this zone. 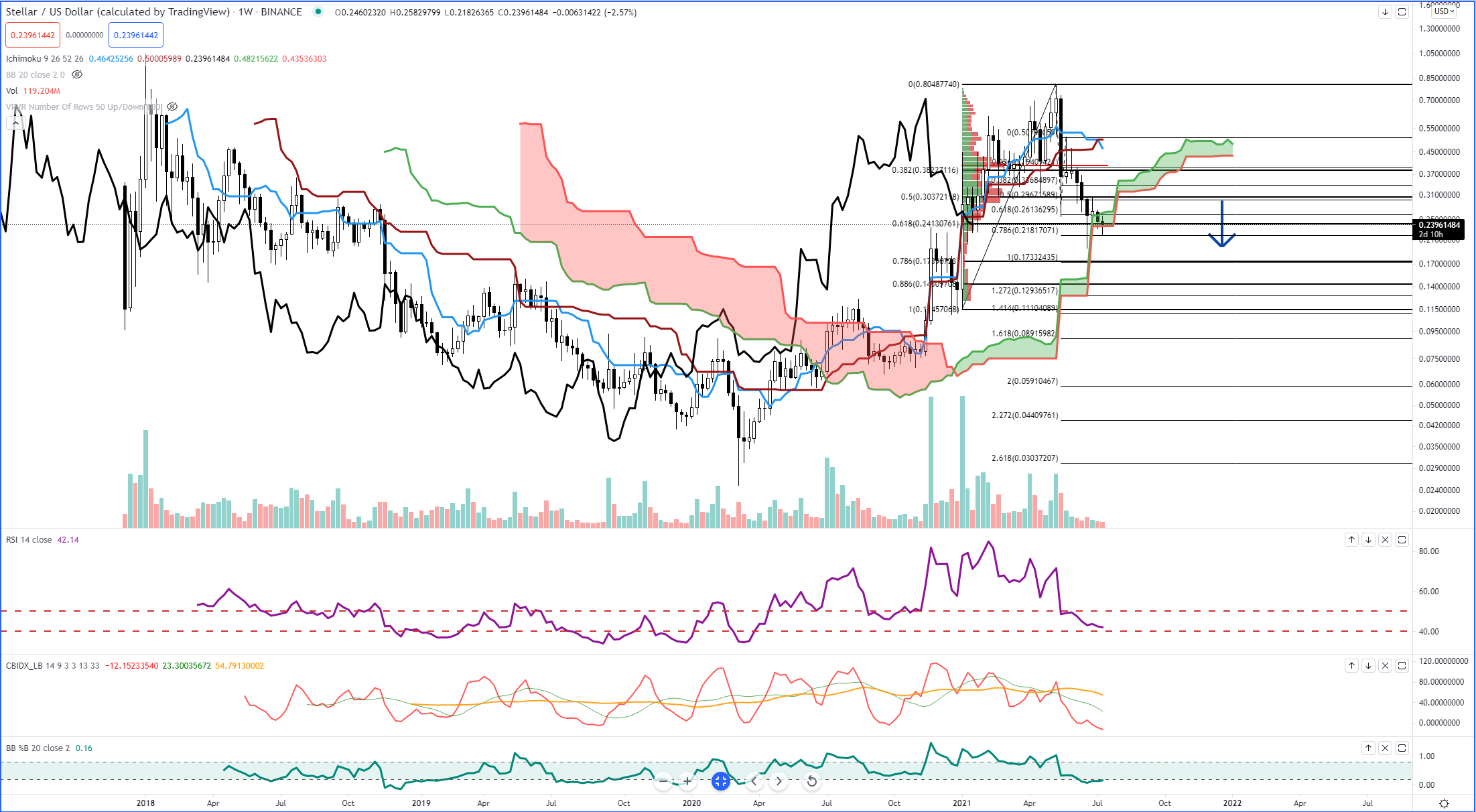 I haven’t written about Stellar in a while, but I think it’s a good idea to do that today. Out of all the cryptocurrency charts that I look at, Stellar has one of the strongest and most supportive charts. It is currently trading at a very, very strong support zone with a cluster of technical pointing to this support likely holding. The 61.8% Fibonacci Retracement at $0.2413, Senkou Span A at $0.2652, Senkou Span B at $0.2361, and the 78.6% Fibonacci Extension at $0.2187. All these values are on the weekly chart. There is also a likelihood that Stellar may find support on the weekly RSI at the final oversold level (40), which it is currently trading above (42.15). The Composite Index on the weekly chart is at a historical support level and we could very likely see a bounce or at least a cessation of lower prices for a while. And finally, the %B is coiled up and looks as if its going to cross above the 0.2 level. Many signs here point to Stellar being an outperformer here in the near future.

Save money on your currency transfers with TorFX, voted International Money Transfer Provider of the Year 2016 – 2020. Their goal is to connect clients with ultra competitive exchange rates and a uniquely dedicated service whether they choose to trade online or over the telephone.
Find out more here.