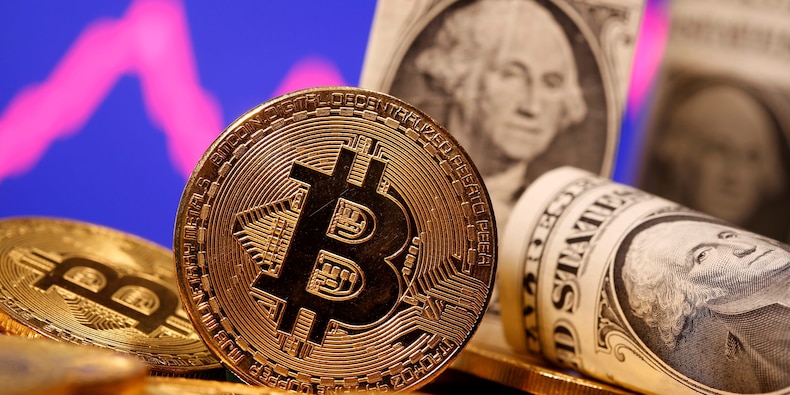 Bitcoin tumbles 6% to below $53,000 while ether slides – as analysts warn of a correction in crypto markets | Currency News | Financial and Business News

The bitcoin price fell 6.2% to $52,975 on Wednesday, as retail interest slipped and the options market triggered volatility.

Ether (ETH), the second biggest cryptocurrency, also slid around 6% to $1,614. Binance coin, polkadot, Cardano’s ADA token and XRP were down between 3% and 13%.

Analysts suggested a key reason for bitcoin’s fall was the more than $5 billion of options that expire on Friday, which is adding to volatility as investors close out their positions.

Options are contracts that let investors bet on which way the price will go, without having to trade the digital currency itself.

The unwinding of contracts and some investors trying to push the price lower to make money from their bets against bitcoin in the options market “have led to spot selling pressure into quarter end,” Shane Ai, head of research and development at crypto exchange Bybit, told Insider.

He also said Tesla’s announcement had started accepting bitcoin as payment – which saw the bitcoin price to spike above $57,000 – had caused some investors to sell their coins and make a profit.

After bitcoin’s meteoric rise, a growing number of investors are predicting a fall to lower levels.

BlockTower Capital founder Ari Paul tweeted that bitcoin falling back to around $40,000 “is plausible and I’ll likely be buying there.” He said there were “too many people positioned for immediate upside continuation.”

Bobby Lee, the founder of the crypto exchange BTCC, told CNBC that bitcoin could reach $300,000 before the “bubble” pops. “People should be aware that it could fall as much as 80% to 90% of its value from the all-time peak,” he said.

Justin d’Anethan, head of exchange sales at Nasdaq-listed crypto firm Diginex, told Insider the recent sell-off in the stock market had likely spread to cryptocurrencies too.

“With concerns around the economic recovery, doubts about recent employment data and infection rates ticking up, investors seem to have transferred some of their equities holdings into cash. Crypto investors likely did the same,” he said.

However, many bitcoin advocates have pointed to growing institutional interest as a reason bitcoin is unlikely to crash, as it has in the past. Visa, Morgan Stanley, and JPMorgan are some of the latest big names to get involved.