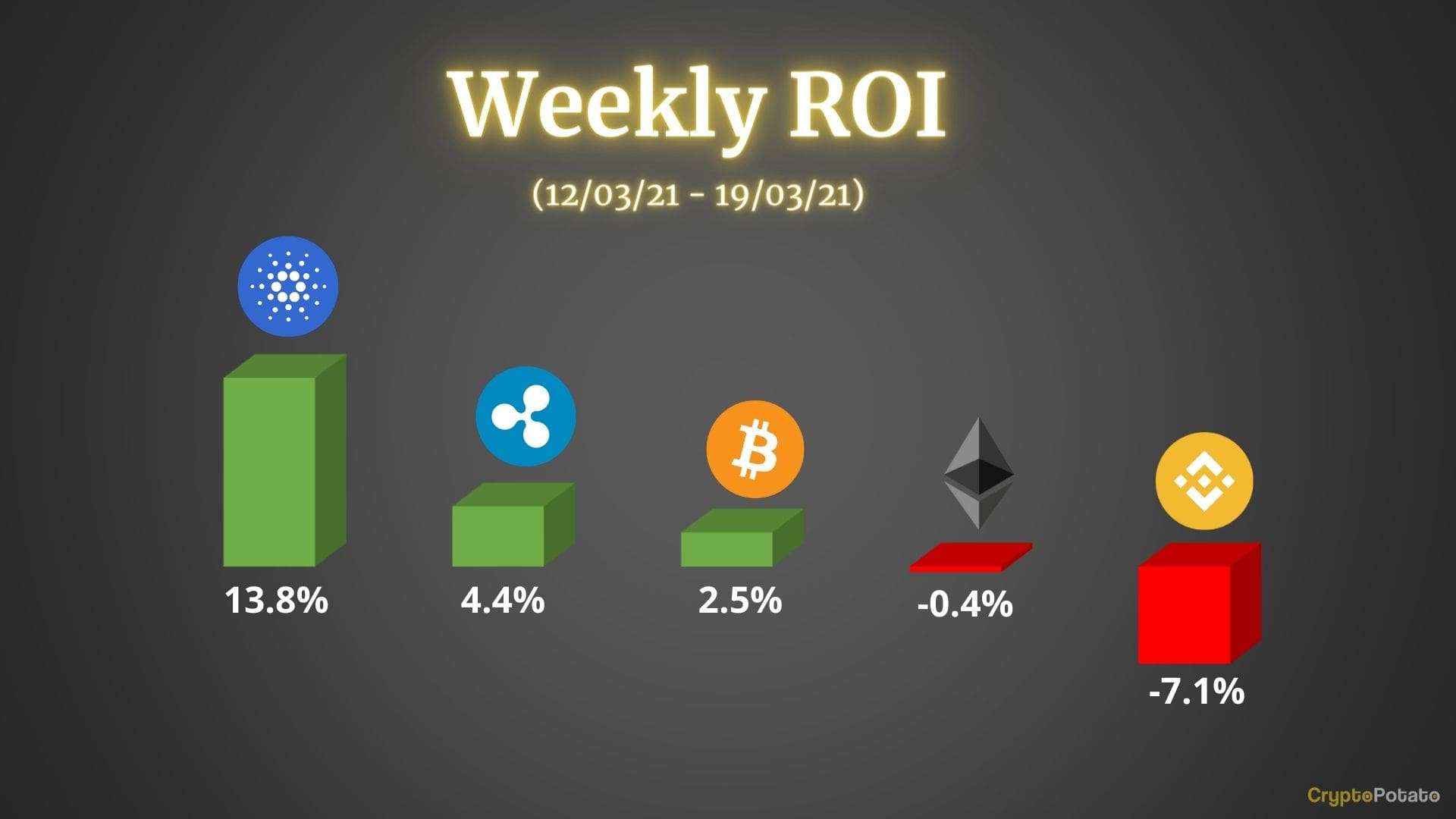 We saw a rollercoaster of price action over the past seven days as Bitcoin went to set a new all-time high slightly below $62K, only to retrace to about $53K a couple of days later. Most of the altcoins followed suit, though some came out of it better than others.

Bitcoin is up by a small 2% over the past week as it trades at the $59,000 level. The cryptocurrency had surged higher last weekend to set a new ATH at $61,781. It was trading inside an ascending price channel for the majority of March until it hit the ATH over the weekend.

From there, Bitcoin started to fall at the beginning of the week. Initially, it found support at $55,465 (.382 Fib) on Monday but continued to spike lower into $53,500 (.5 Fib) on Tuesday. Luckily, the daily candle for Tuesday closed above $55,465, and it allowed BTC to rebound from there,

Ethereum pretty much moved sideways this week as it trades along with the support at $1755. The coin was trading at this level last Friday but managed to spike above $ 1900 over the weekend. However, as Bitcoin started to drop on Monday, Etheruem also headed lower until finding support at $1755.

It has now traded between $1755 and $1875 for the past fortnight (besides the weekend spike higher) and must break this range to dictate the next direction for the market.

Etheruem has also moved sideways this past week against BTC. It was trading at support around 0.0305 BTC last Friday but managed to push into the resistance at the 200-day EMA during the week. Unfortunately, it could not close a daily candle above the 200-day EMA at around 0.0321 BTC and ended up rolling over the past few days.

It dropped until support was found at 0.0305 BTC again yesterday and has since pushed slightly higher to 0.0309 BTC.

XRP saw a small 4.5% price hike this week as it currently trades at $0.47. The cryptocurrency fell beneath $0.45 last week as it found support at the 100-day EMA at around $0.42. Throughout the week, XRP started to push higher and even managed to spike higher above $0.5 on Tuesday.

Unfortunately, it was unable to sustain these highs and has since dropped to $0.45.

Against Bitcoin, XRP is attempting to recover from last week’s price fall when it dropped beneath 1000 SAT to reach the support at 742 SAT. Over the past seven days, XRP has pushed higher but has been unable to move much further above 800 SAT, where it currently trades.

Binance Coin saw a sharp 7% price fall over the last week as it currently sits at $266. The cryptocurrency had been trading at $295 at the start of the week as it started to drop lower and headed beneath support at $262 (.382 Fib Retracement).

After breaking beneath this support, BNB managed to bounce from the support at the lower boundary of the symmetrical triangle it is currently trading within. BNB will need to break one of the boundaries of this triangle to dictate the next direction for the market moving forward.

BNB has been relatively static against Bitcoin over the past week. It did drop from above 0.005 BTC last Friday to reach support around 0.0045 BTC (.5 Fib). It has held this support over the past week of trading.

Cardano is up by a strong 14% over the past week as it currently trades at $1.28. The coin was at around $1.05 last Friday as it began the weekend by trading sideways. Most of the gains came on Tuesday when Cardano surged from $1.00 to reach $1.25. It continued higher through Wednesday and Thursday to reach as high as $1.47.

ADA is performing well against Bitcoin also as it bounced from the support at the 1800 SAT level at the start of the week and managed to push as high as 2500 SAT yesterday. It has since dropped lower today as it now trades around 2177 SAT.