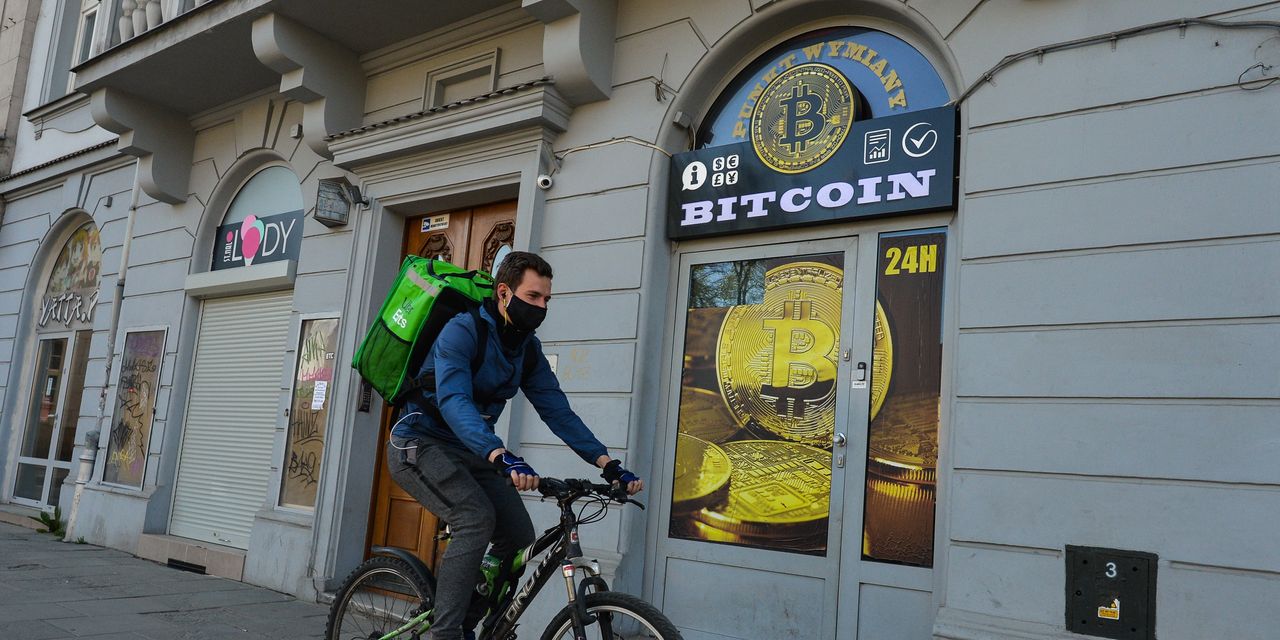 This year’s furious rally in cryptocurrencies lost steam Tuesday, knocking prices for bitcoin and ether from recent highs, alongside drops in other risky assets including tech stocks.

Bitcoin fell 13% to $48,016 after hitting a record of $58,332 on Sunday, according to CoinDesk. The decline pushed its market cap, the value of all bitcoin in circulation, to $895 billion from more than $1 trillion last week. Ether, the second-largest cryptocurrency by total market value, contracted 14% to $1,540.

A broad turn in markets toward caution, coupled with historically high prices, likely triggered the correction, analysts and investors said.

“The types of moves we were seeing in 2021 were parabolic,” said

a strategist at cryptocurrency exchange LMAX Digital. “When you see moves like that, it’s obvious these markets are going to be due for a pullback.”

Assets—crypto or otherwise—that gained the most during the pandemic have slipped in recent days as investors bet on economies opening up. U.S. government bond yields have risen to their highest level in a year. When yields on safe bonds rise, that makes speculative assets, such as cryptocurrencies and shares in companies with profits far in the future, less attractive.

There are other catalysts weighing on cryptocurrencies. Over the weekend, the crypto world’s richest advocate,

this week called bitcoin a highly speculative, inefficient form of digital currency that is often used for illegal transactions, in a newspaper interview. She also signaled that she supported research into a Federal Reserve-backed digital dollar.

Bitcoin and ether are the two leading cryptocurrencies. They operate separately, but are both created when computer “miners” solve complex mathematical equations to unlock or mint new coins.

What do you make of the sudden plunge in cryptocurrencies? Join the conversation below.

Bitcoin was created as a store of value and a means to facilitate decentralized transactions. Ether is part of a wider ethereum network, which has a broader focus to store items including financial contracts and applications. Unlike bitcoin, ether’s supply isn’t capped and its supply schedule is determined by members of ethereum’s community, according to CoinDesk.

Both have been caught in an investing frenzy as traders chased spectacular gains. Advocates see the currencies, independent of governments and central banks, as a hedge against the debasement of traditional fiat currencies. Skeptics dismiss them as speculative.

A steady stream of institutional demand has been credited with driving much of bitcoin’s rally since the start of 2020, when it traded near $7,000. Billionaire hedge-fund managers have disclosed purchases, with

calling it a “great speculation.”

Earlier this month, Tesla disclosed that it bought $1.5 billion in bitcoin for its corporate reserves. Tesla shares ended Tuesday’s session down 2.2% after falling as much as 13% earlier in the day.

Shares of cryptocurrency and blockchain-related firms also came under pressure.

both fell more than 20%. Shares of online retailer

which allows payments in bitcoin, fell more than 7%.

, a La Jolla, Calif.-based bank that has for several years served crypto firms as a core part of its business, saw shares decline 20%.

Where bitcoin’s price might stabilize is hard to say. Cryptocurrencies are notoriously volatile and prone to large swings in a single day. Determining a fair value for bitcoin is much harder than valuing stocks, investors say.

“I would guess that a pullback actually adds to its appeal because it takes some of the froth off,” said William Hanbury, a fund manager at U.K.-based Waverton Investment Management.

That said, it can be difficult to tell when bitcoin’s fall might stop, said Mr. Hanbury, who monitors bitcoin but doesn’t hold any in his portfolio. Past corrections have varied widely in their steepness, making it hard to assess when investors might want to add exposure.

“You can kind of end up chasing your tail,” he said.

Write to Caitlin Ostroff at caitlin.ostroff@wsj.com