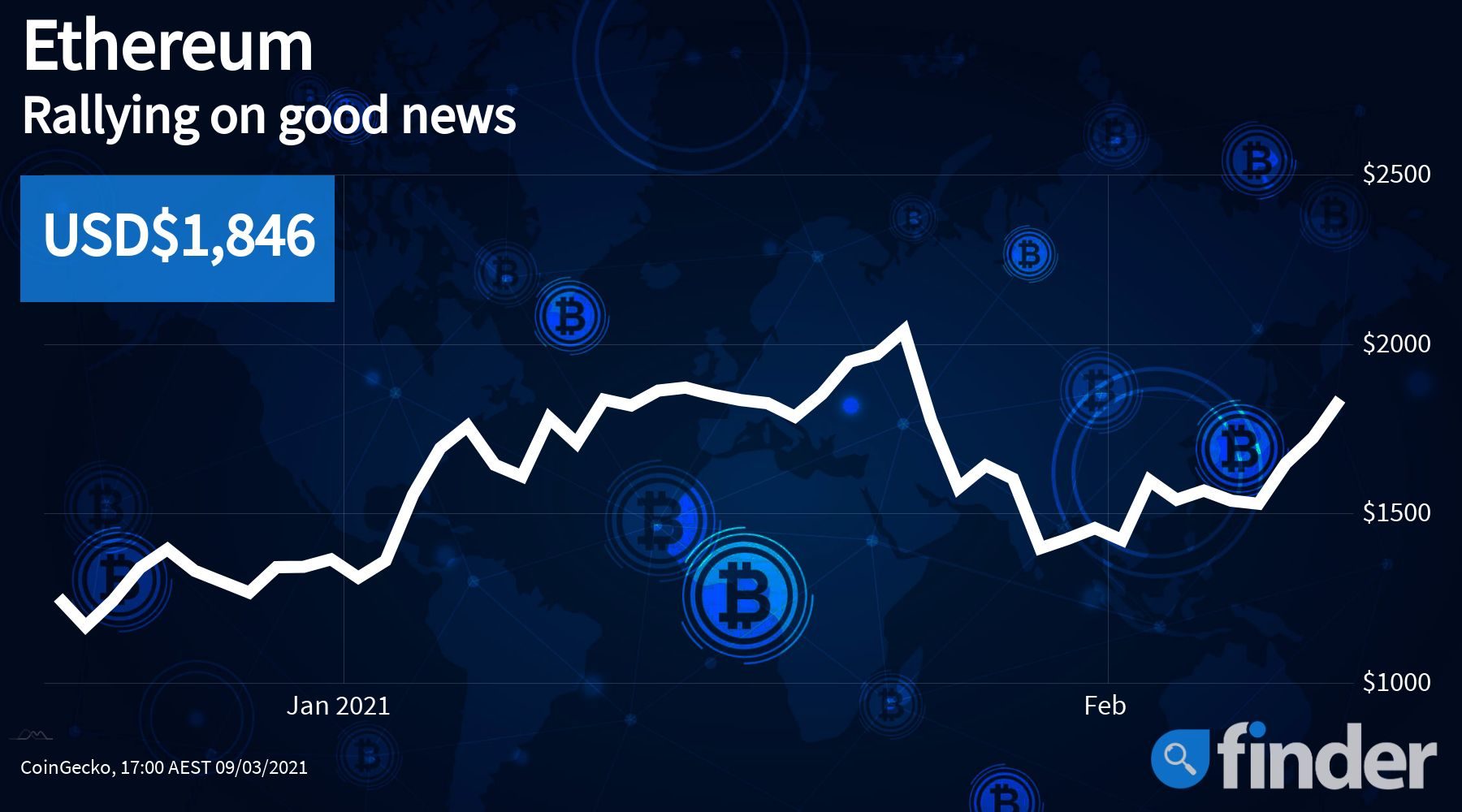 Ethereum price rallies as $1.9 trillion stimulus package gets clearance from the US government

ETH is once again trading well above the $1,800 mark, thereby showcasing weekly gains of around 20%.

ETH is once again trading back above the $1,800 mark, thereby showcasing weekly gains of around 20%.

After hovering around the $1,700 region for over 48 hours, Ether has suddenly rallied hard, currently showcasing a strong upward trend. In this regard, the premier altcoin is exhibiting gains of over 5% following yesterday’s market cycle, currently sitting at a comfortable price point of $1,830.

The above-stated momentum comes in the wake of President Joe Biden announcing that the United States Senate had cleared the long-awaited $1.9 trillion stimulus package that his team had been working to get to the public for quite some time now. In his view, the checks should be issued fairly soon, adding: “Help is on the way. It wasn’t always pretty, but it was so desperately needed, urgently needed.”

Furthermore, it bears mentioning that as per data released by Santiment, ETH whales — i.e. is those addresses with 10k+ tokens — are currently responsible for 68.6% of the currency’s total supply. This number has surged quite drastically since November 2017 but at the same time, the number of addresses holding between 10-10k ETH has gone down to its lowest levels since September 2017.

Ether still hasn’t been able to de-couple from Bitcoin

In light of Ether’s recent market movements, it is quite obvious for everyone to see that the second-largest cryptocurrency by total market capitalization seems to be following BTC’s price movements quite closely after having showcased increasing signs of decoupling from the flagship asset over the last couple of months.

In this regard, Sam Tabar, former managing director for Bank of America Merrill Lynch and co-founder of Fluidity (the firm behind P2P trading platform AirSwap), pointed out:

“It’s inevitable that BTC and ETH will remain correlated to some degree, at least for the foreseeable future. BTC is the world’s leading digital asset and is paving the way for the rest of the industry: when it does well, everyone else usually follows. BTC’s successes and failures influence overall consumer confidence in cryptocurrencies.”

This being said, he added that it’s important to note that ETH and BTC are still very different investments. Although they remain correlated, fluctuations in the strength of this relationship are common and can have a variety of explanations, stemming from the simple fact that both currencies have different goals.

BTC is a store of value, while ETH is the foundation for an extremely versatile economy. In this vein, while both currencies can be affected by incoming governmental laws quite drastically, the degree of this effect can differ quite substantially. For example, even if ETH becomes restricted by governmental regulations, businesses will still be able to use the Ethereum platform and the ecosystem around it will, by and large, remain unscathed.

When asked about whether ETH will continue to simply follow BTC for the foreseeable future, Tabar made it quite clear that Bitcoin is the clear alpha of this market, especially as it continues to attract record institutional interest, with its vote of confidence trickling down to the rest of the market. He added:

“Ethereum simply hasn’t done enough presently to break away on its own. The platform still has huge scalability issues, high gas fees, and has repeatedly failed to stick to a concrete rollout plan for its ETH 2.0 update. Its price movements are a consequence of a global bull run and not actions taken by the network itself.”

What lies ahead for Ethereum?

Even though Ether seems to be facing a crazy amount of volatility over the course of the last few weeks, it is important to keep things in perspective. For example, back in January 2018, ETH fell from $1300 to around $80 within a span of some 10 odd months. However, the premier crypto has not only made an amazing comeback but is also drawing some heavy institutional interest in recent times.

That being said, with the NFT craze just beginning to take off, experts believe that Ether really needs to fix its monetary policy to fully capitalize on this trend. “EIP 1559” should help in this regard, especially since the update will decrease the supply of Ether by burning tokens every time it’s used as fuel, lowering fears of inflation and boosting confidence in the network.

The update will also provide users with an average price for fuel fees and make ETH the only payment method for these transactions. This will ground ETH as a core tool within the network, decreasing existing volatility surrounding the currency and increasing demand. “Prior to this, users had to guess what transaction fees would be, often paying hefty premiums to miners. EIP 1559 is expected to roll out in July-August”, Tabar opined.

Providing his take on Ether’s future, Sidharth Sogani, Founder & CEO of blockchain intelligence firm CREBACO, pointed out to Cointelegraph that the market is “hanging” right now, with there being a clear possibility of a breakout in the near term, adding:

He further opined that in light of the currency’s ongoing scalability issues, chains like Cardano and BSC are challenging ETH, especially BSC as transactions are super cheap on the network. That being said, Sogani believes that ETH is still the most diverse and decentralized network in the market today.

In spite of all of Ether’s drawbacks, Tabar told Finder that he still believes ETH will prevail and successfully gain independence from Bitcoin somewhere down the line. In his view, most people end up spending too much time comparing ETH with BTC, forgetting that the former is the foundation of a multi-billion dollar economy. He added:

“Stablecoins and NFTs are some of the biggest sectors within its ecosystem, and their popularity is skyrocketing. They’re tangible use cases for the blockchain industry and will spark increased institutional interest in Ethereum. Combine these two trends with the rollout of Optimism on March 15th and the first stimulus checks on March 22nd, and I’d expect to see some great weeks ahead for Ethereum.”

For those not aware, Optimistic Rollups (ORs) are a type of layer 2 constructions that do not run on Ethereum’s base layer rather atop it. Using them, it is possible for smart contracts to run at scale while still being secured by the ETH network.

Interested in cryptocurrency? Learn more about the basics with our beginner’s guide to Bitcoin, keep your crypto safe with a hardware wallet and dive deeper with our simple guide to DeFi.

Disclosure: The author owns a range of cryptocurrencies including at the time of writing