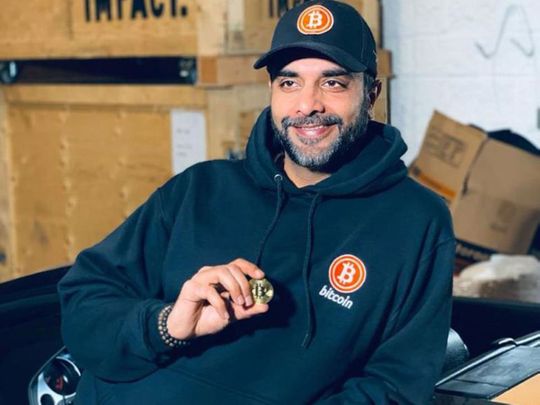 Dubai: Want a cryptocurrency other than Bitcoin, which is now at a whopping $60,000 levels? Try Ethereum.

A former Dubai-based businessman is staking a considerable fortune and time in creating sufficient investor momentum for another digital asset. And he’s doing it in Toronto.

CanETH, in which Khurram Shroff has a major exposure, will be acquired by iMining, listed on the Toronto Stock Exchange Venture (TSXV), subject to regulatory approval. CanETH provides “staking services and validators for investors interested in Ethereum 2.0, which operates on a ‘proof-of-stake’ model,” said Shroff, who heads IBC Group.

“The company has identified many projects, in the Blockchain and cryptocurrency space, which will be announced in due course. iMining is basically taking Ethereum, which is already an existing cryptocurrency, and that gets locked in an Ethereum 2.0 deposit contract, for validation.” (Proof-of-stake is about maintaining a cryptocurrency’s integrity, by preventing users from printing extra coins they haven’t earned.)

The IBC Group, a Blockchain investment company, is currently headquartered in Dubai. But the plan is to shift to Toronto given the Canadian city’s fast-growing status as a fulcrum for everything related to digital assets.

On its own roll

Ethereum, rated as the third most popular cryptocurrency after Bitcoin and Bitcoin Cash, is currently valued at $1,886 for one coin. It too gained from all the attention Bitcoin has been having vis-à-vis investors. Shroff – who already has a sizeable investment in Bitcoins – believes there is more to come on the Ethereum front.

“One of the reasons we believed the acquisition (of CanETH) by a publicly-listed company (iMining) should go through was because it legitimizes Ethereum, and the entire associated ecosystem, in the DeFi (Decentralised Finance) market, for validation,” he added.

“We believe this is going to be the only way Ethereum will be mined moving forward. Of course, this is particularly significant because Ethereum is the second biggest blockchain in the world, with a 24-hour volume of between $25 billion to $50 billion.”

The acquisition by iMining was for 48 per cent of the stock at that time, at a price of 10 cents. Existing CanETH shareholders keep the rest, for a cumulative of about 78 million shares.

On the first day that iMining started trading again, after a halt of two weeks, the shares “were the best performing stock on Toronto’s TSXV. The TSX Venture Exchange is a public venture capital marketplace for emerging companies, and one of the leading fully electronic exchanges in the world, with no physical trading floor.

The decision to list in Toronto might surprise those who would think anything to do with cryptocurrencies will have to be done out of the US. But Shroff isn’t one of them.

“Toronto has been at the forefront of the Blockchain and cryptocurrency revolution,” he said. “The first Bitcoin ETF was listed in Toronto, The Bitcoin Fund was listed here. “And now CanETH, through the acquisition by iMining, is the first Ethereum 2.0 proof-of-stake company. So it was the ideal market to go public in.

“Also, part of the reason investors are still making their minds up about Bitcoin is because holding cryptocurrency directly is still problematic. By having it publicly traded, they can now talk to an investment advisor – and talk to a regulated publicly-traded company on the renowned Toronto stock exchange.”

Not a rush job

Shroff sweeps aside any talk that CanETH – and the Ethereum movement that it backs – might have rushed into a public listing and all the responsibilities that come with being part of a publicly-traded enterprise.

“We could have developed in our own space and time, but the public listing was important for the legitimacy of Ethereum 2.0 and the entire staking community,” said Shroff. “As we speak, $6 billion has been staked, and in December 2020, we were instrumental in the Ethereum 2.0 beacon chain achieving threshold, by staking about $500 million.

“So, there’s considerable value being staked, and with EIP 1559 being implemented in the next few months, Ethereum 2.0 will start burning transaction fees, which will start creating additional supply stock for Ethereum.

“This will lift the price and create substantial returns, for publicly-listed companies directly or indirectly within the Ethereum ecosystem.”